Primer: The Power of Will in International Conflict

The paper below is a primer, which appears as an electronic booklet. You will find it interesting in both an intellectual and technical sense. In the primer, I provide some of the main ideas in my book, The Power of Will In International Conflict.

As a first substantive step in the primer, I ask a question—What do you know about this important phenomenon, will?  In 2006, as I was writing Intelligence Analysis How To Think In Complex Environments, I determined that I had not sufficiently explored the subject—will. So, I wrote The Power of Will in International Conflict. I am proud to say the quality and rigor in my book of will turned out well, but I affectionately admit the book to be challenging to read.

The primer comes as a series of connected parts. In this way, I provide readers with a short discussion of a few of the book’s main ideas. To enhance understanding, a visual appears at the start of each subject, and I scattered more visuals at appropriate places throughout the primer. I talk to each visual. Accordingly, you will see 27 figures, three tables, and related discussions in this primer. 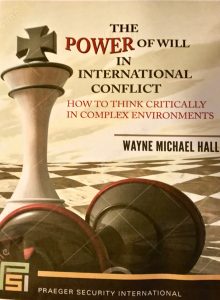 Will is the central idea of any conflict. Without it, conflict would not exist. Thus, I argue for preeminence of effort to learn how to think about imposing our will and thus winning fights that decide information superiority, knowledge superiority, and decision superiority, the quality of decisions, the quality of the thinking that goes into decisions, and dominance of wills. Each prove essential; they prove to be inescapable aspects of conflict. Thus, we have to learn ‘how to think’ about achieving victory in struggles of will.

My book helps people learn how to think and understand this great phenomenon—will. This primer introduces some of the ideas in my book of will and foreshadows the book’s themes, definition, thought models, and concepts. In my view, good minds armed with a deep knowledge of will meet the challenge inherent to winning or losing in any conflict involving supremacy of will. Please enjoy the primer and think about its explanations, messages, and reasoning.